It should have been over for Llwybr Llaethog – the moment they chose that name.

It was done as a bit of a laugh – because it’s so tricky to say. And when you’re starting out as a London-based, Welsh-language, experimental electro-dub band – you don’t really need to make things any harder for yourselves.

But that was back in 1985 and Llwybr Llaethog (Welsh for Milky Way) are now celebrating 28 years of making beautifully weird and wobbly Welsh noises.

They are John Griffiths and Kevs Ford. They met as teenagers in Blaenau Ffestiniog; where they first acquired a taste for dub reggae.

They’ve released 11 albums and have collaborated with loads of different people – including the likes of Super Furries, David R Edwards, Steffan Cravos and Gwenno Saunders.

Their latest album is Dub Cymraeg. It’s class and you can find it here. To find out more about Llwybr Llaethog have a look here or follow them on Facebook or Twitter. 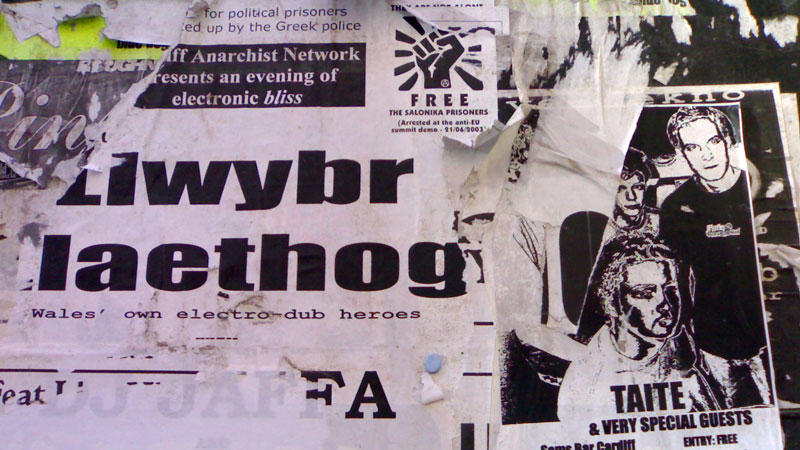 I’d grown up in Manchester but the family moved to Blaenau Ffestiniog when I was about 12; that’s where I lived until I was 18.

It was all a bit of a culture shock, really. It was early 70s, so I had long hair – girls fancied me but boys wanted to beat me up. And I found Blaenau to be quite a dark place – there was a kind of macho and violent vibe that I didn’t want to be a part of. So I suppose music was a way to get away from it all and find people with similar attitudes.

There was no Welsh taught in our school at that time for learners, so I picked it up from the playground and around and about. It’s amazing how quickly you pick stuff up like that – by osmosis.

I guess it’s a survival thing; you adapt to the environment you’re in – because there’s no option. It was a very Welsh-speaking area; everything was Welsh in the shops and pubs.

But it meant the Welsh I learnt was a kind of street Welsh – not exactly academic. And I still think of myself as a learner. 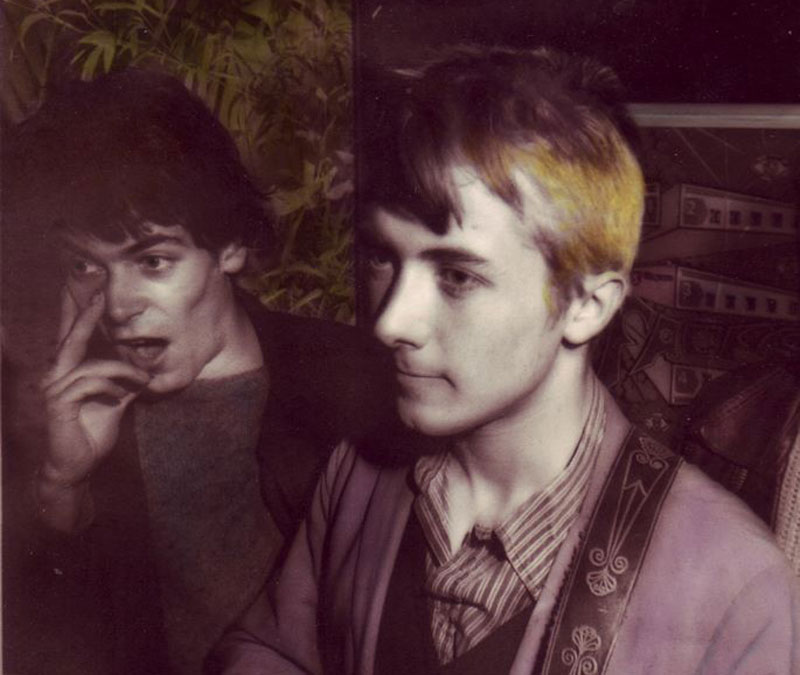 I’d moved to London after school in 1977. It was when punk was starting to kick off; I just wanted to be there and be a part of it.

I was involved in a few different things, various bands, but Llwybr Llaethog started in 1985. Me and a mate, Kevs, did it as a bit of a joke really. He was working in a studio at the time, so we decided to record a couple of tracks in Welsh.

We did all the recordings when the studio was free during the night. So we recorded our first record, Rhys Mwyn heard it; asked us to record a few more which he put out as an EP and that’s how it all started.

I was working on trying to improve my dodgy Welsh when I was in London. I’d sit down with a Welsh magazine or an article and a Welsh dictionary to help me out.

And I just found Llwybr Llaethog in the back of the dictionary one day; I saw it in the glossary terms. I thought – that looks mental; nobody’s going to be able to say that outside of Wales.

So we chose it for a laugh really – bit of mischief. If I’d have thought Llwybr Llaethog would lead to anything, maybe I’d have chosen something easier to say. But it’s different.

I suppose, you could say it was anti-commercial; a bit of a punk attitude coming out – but it wasn’t any kind of statement. We didn’t think that deeply about things, to be honest.

At the time Welsh radio was refusing to play a lot of the music that was coming out from people like ourselves and Datblygu. So John Peel was extremely supportive – he was backing us when it really wasn’t trendy to be into Welsh music.

He played everything we did and we ended up recording four sessions for him. He would often ring me up before it went on-air; just to check how the hell you say the name.

Apart from John Peel, I can only remember one show on Radio Cymru at the time that would ever play our music. It was only about an hour-long show on Saturday mornings by someone called Richard Rees; who I think is still broadcasting.

So you had this one-hour slot each week and that was your only chance of getting something played in the whole of Wales. It was exactly the same for a lot of the groups around at the time.

When we started, we didn’t have computers. So we’d record everything onto tape using whatever instruments we could find. It was just a case of messing around and experimenting.

We’d got into dub music when we were teens and living in Blaenau; this was before punk rock came along. Some English hippies had played us some dub and we’d never heard anything like it.

So from then on, we were trying to work out how it was done – how they’d managed to create all these weird sounds. Those classic early dub recordings, from back in the 1970s, were done on four-track tape recorders with echo machines and loads of reverb.

That’s pretty much what we used as well when we started out. One of the tracks on this album, Malu Cachu Dub, dates back to one of those first recordings; that’s done in 1985. 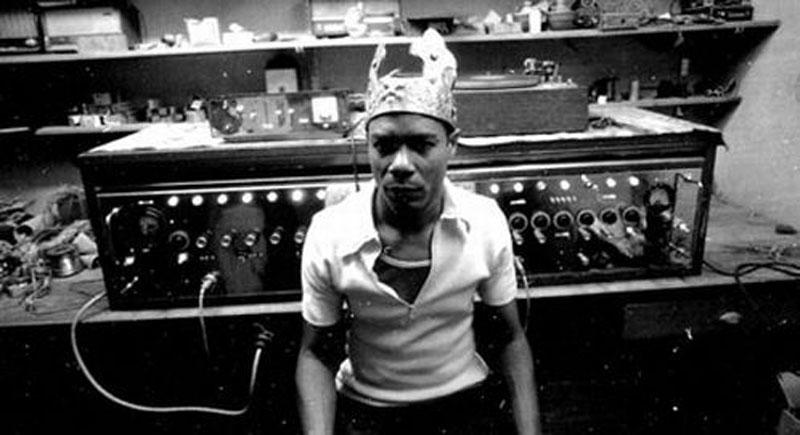 The inspirations for us were people like Adrian Sherwood on U-Sound and then 70s reggae and dub stuff – Lee Perry and King Tubby, people like that.

Before punk came along we were into American rock stuff – I’ve always liked fuzz box guitar. Then there was electro which turned into hip hop – that early New York music.

We tend to just absorb anything that’s around at the time.

It did feel good to be part of something. Our first EP was put out on Anhrefn Records with profits going towards Cymdeithas yr Iaith. We used a sample of Ffred Ffransis; he was a language campaigner who was in jail at the time for protesting.

We did feel like we were standing up for the language. And it would have seemed terrible, at the time, if we’d done something in English – kind of selling out.

But after Cool Cymru and Super Furries and Catatonia, the mood changed a little. And over the years, we’ve collaborated with people singing in lots of different languages.

Some in English, some in French; even an African language called Mandingo. But after 28 years, we’re still mainly recording in Welsh.

It was, and it still is, a political statement – but political with a small ‘p’. Because it’s still an issue for some – they still have a problem with the Welsh language.

Wales is a really complex place and language does play a big part of that. That’s what makes it different to a lot of other countries in a similar relationship to us – living under the shadow of a bigger neighbouring country.

The media in the UK plays a major role in this and the fact that it’s all so London-centric. It’s really hard to break through that.

It’s something I find when promoting the albums; it’s incredibly difficult to get anyone to take a look – because they’re not in English. I think they see the name and it’s a different language – so it’s not for them.

It’s much less of an issue outside of England. When you travel around Europe people are listening to all kinds of music in lots of different languages. But in the UK there’s still a closed minded attitude – if it’s not in English, then it’s an issue.

Maybe it would be different if we were singing folk music or something a bit more foldy-roldy.

I think the way that Welsh culture has been divided is daft really. There’s much more made of it than needs to be.

My dad was Welsh. My mum was English. My dad was a Welsh nationalist. They both supported the language – although my mum didn’t speak it.

The whole of my dad’s family was first language Welsh and I just feel lucky that, through the accident of moving around, I was able to pick up Welsh.

I was never part of the eisteddfod or that traditional Welsh side of things, so I see if from both sides. I’m a weird form of cultural half-breed; probably same as a lot of people in Wales.

What I’ve found hard is that when we put something out, we won’t get many proper reviews. It’s more that people are just excited because we’ve made something in Welsh – which is great.

But you don’t get much in the way of critique; somebody who listens to and it says, this bit’s good, this is a bit crap – or whatever. I think there’s the same kind of problem across the board with Welsh language arts and music.

It’s much easier to make music available now but harder to get it noticed because there’s so much out there. In the 80s we could never have released an album like we do now – it was prohibitively expensive.

We’d always have to go cap in hand to somebody. So it’s good but, to be honest, it just means more bloody work. We’ve got a Facebook page and a Twitter thing and a website. So you have to keep them all going and then check the orders. And pack things up. Go down the post office with the albums and all that stuff. 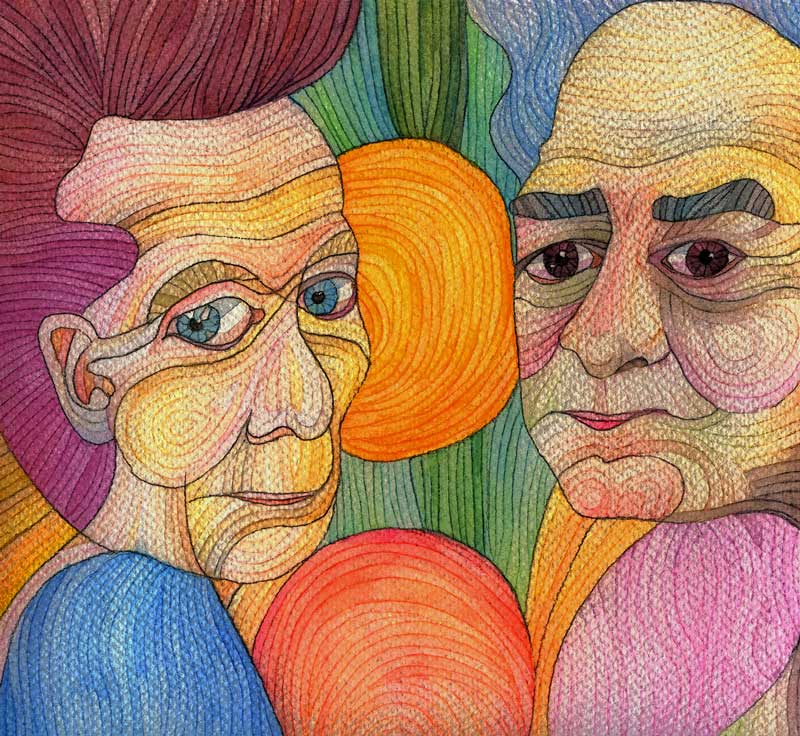 Illustration by The Lovely Wars (thelovelywars.com)

We’ve never been that successful or made much money out of it; we’ve always been a bit under the radar. But it was the same with Datblygu until they stopped recording for a few years and then suddenly everyone starts noticing them. Maybe that’s where we went wrong – one of us needs to die in a plane crash or get eaten by a bear. But I’ll soon be 55 and it’s just good to still be releasing records.

What’s happening in the UK now feels similar to what was going on in the 80’s – but the music’s different. It seems people are more resigned to things, they don’t feel there’s anything that can be done – there’s no point trying to push against it. So music tends to be more folksy and escapist. Something does seem to have changed.

I hope Scotland decide to go their own way because, on a basic level, I think Scottish people will be better represented by a Scottish government. I’d like to see things moving in that direction with the Cynulliad but I think a lot will depend on what happens in Scotland first.

Not sure what we’ll be doing next. But after getting some of the dub out of our system,  we’ll try something different.