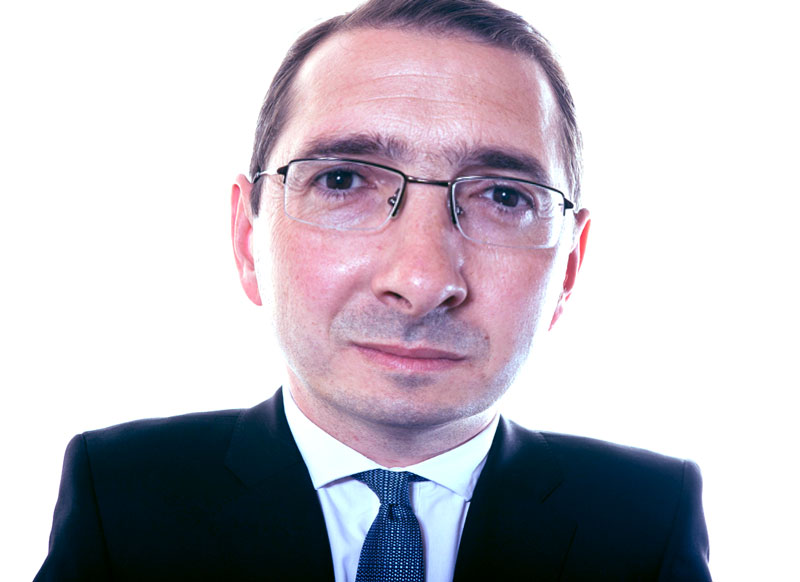 It would be unfair to say that Owen Smith is ideologically opposed to Wales.

That’s because, as a career politician, his views on the world are so incoherent and contradictory that it’s difficult to say what, if anything, he genuinely believes in – other than obtaining power.

This is a former CND member who’s opposed to nuclear weapons but who backs the spending of £200 million on Trident; a nuclear weapon system he’s fully prepared to use to kill tens of thousands of civilians.

This is a socialist politician who claims to idolise the NHS, despite having devoted a large chunk of his professional life to working for pharmaceutical companies and promoting the privatisation of healthcare.

This is a ‘proud Welshman’ who purports to be a supporter of Welsh devolution despite a Westminster history of blocking and opposing any meaningful powers being devolved to the Welsh Assembly.

One of the moves he’s known to have vehemently opposed is the devolution of policing, this is despite the support it received from First Minister Carwyn Jones.

He’s an internationalist who suggests that borders are outdated concepts and scowls at Welsh and Scottish nationalists for being petty and parochial. And yet he endlessly promotes his own flaccid brand of British nationalism.

The flexible and fabricated nature of Owen Smith’s politics mean he could seamlessly switch to any of the mainstream parties. But when it comes to nationality, it’s with the Little Englanders of UKIP that he would be most at home.

His British first approach treats Wales as a loyal region of England; no different to Leicester or Burnley or that other large northern English region…Scotland.

He views anything Welsh, other than rugby, as being a potential threat to his patriotic dreams of creating ‘one nation’ – that nation being Britain/England.

This was the inspiration behind the vacuous ‘One Nation Labour’ slogan he coined. It was briefly adopted by Ed Miliband as a failed attempt to use English/British patriotism to appeal to those voters being lost to UKIP.

Behind the rhetoric, Owen Smith’s ‘One Nation Labour’ is a muddled and incoherent mess; a ham-fisted attempt to promote British nationalism while trying to rationalise his fervent opposition to Welsh and Scottish nationalism. He tries to position himself as a supporter of Wales and Scotland gaining more independence, while also railing against it.

“People in Wales, Scotland and England too want more local decision-making, and devolution or other constitutional change may be needed to accommodate those ambitions.

“But separation or independence remains a minority interest – outweighed by economic and emotional reasons for Britain and the British people to stick together.

“That point was brought home to us all by the Olympic and Paralympic games.

“Patriotism and pride in Team GB swept people up, from Plymouth to Perth – and seemed for a few brief weeks to wash away divisions in our society.

“They reminded us how successful our society has been at embracing different cultures and capabilities – and so enriching those of the UK.

“That solidarity of people across Britain is just as important a legacy of the games as the bricks and mortar left behind.”

And sport is a recurring theme for Owen Smith in his ‘One Nation’ crusade. Here he is in 2013 thundering against the idea that Wales, a nation of 3.1 million people, should ever have its own cricket team – rather than being represented by a neighbouring country: 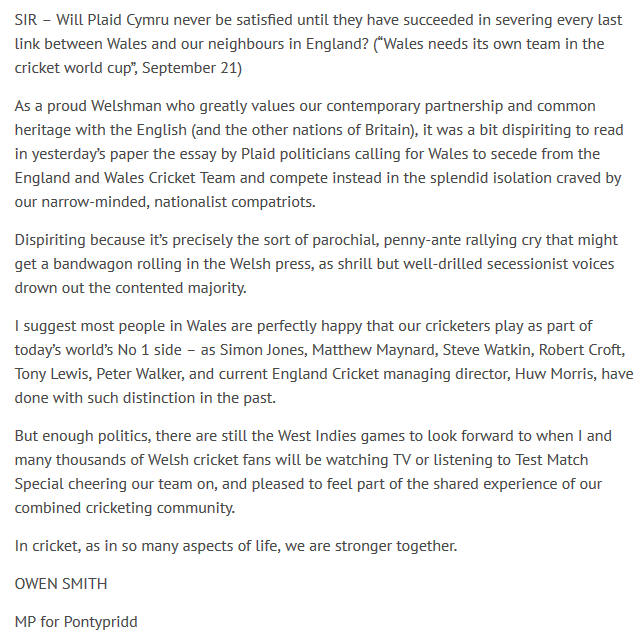 And here he is again in 2014, boasting about the success of a bizarre personal campaign to extend licensing hours in Welsh pubs for England’s games during the World Cup tournament:

The UK Government had set-up a consultation exercise to see how many people in Wales wanted these extended hours and with just 19 people expressing an interest, the plans were quietly shelved. So in overturning this, Owen Smith was speaking up for 0.0006 percent of the Welsh population.

But, in truth, it’s unlikely that Owen Smith cares much about any of these issues. They are simply ways for him to publicly demonstrate a profound disinterest in Wales and a devotion to Britishness, both prerequisites for the country’s Labour representatives in Westminster.