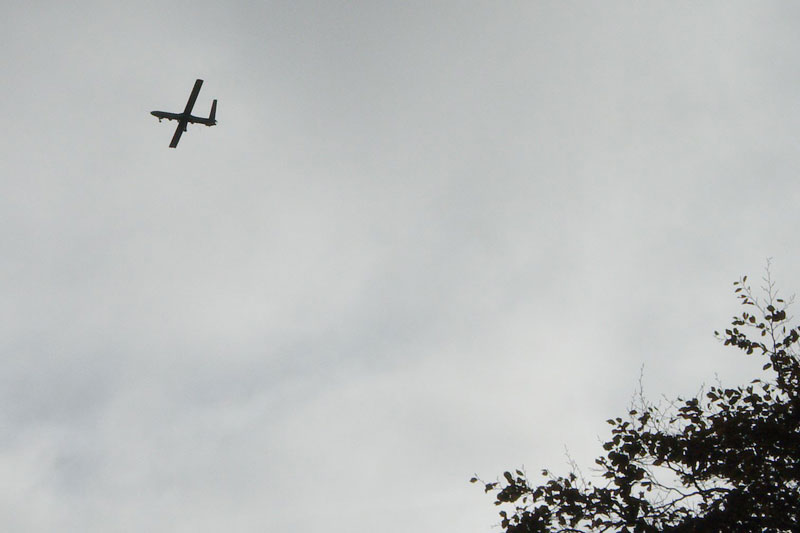 Wales has been living on its industrial past for too long. All this talk about miners and working class struggle and blah, blah, blah – it needs to stop.

In a vibrant and buzzy and connected Wales, there’s no place for dreary old choral music and old people wheezing on about the pits.

No, we need a new upbeat and positive sound to inspire our nation. And thanks to a former English under-14 pole vault champion called Ray Mann – we’ve found it.

To hear it, you simply have to stand in a field in Aberporth, West Wales – close your eyes, gulp in the fresh Welsh seaside air and listen…

There it is. Up from above. It’s shrill. It’s high-pitched. It sounds a bit like a giant electric nasal hair remover – a whiny shrieking noise.

And for bad people throughout the world, it’s the sound they hear just before they’re blown into bloody chunks by a missile.

In Pakistan alone, it has been the last sound heard by 884 civilians (197 children).

But for Wales, it’s an inspirational and glorious sound. This electric shriek represents a proud nation embracing the military-industrial complex.

This is our hope for the future.

It’s the sound produced by the Wankel engine which powers the Watchkeeper WK450 military surveillance drones. These are the flying heroes being tested by the Ministry of Defence at former pole vault champion Ray Mann’s tiny airport in Ceredigion.

The WK450 is designed to hover above foreign lands, spy on people and tag those ones that look naughty. It then hands that info over to its flying drone colleague, the Raptor, which blows these idiots to smithereens.

Ray Mann, a former pole vault champion, had the vision to see that Wales could become a home for the testing of these magnificent angels of death. Most people thought Ray was a chancer looking to make himself a few quid. But the Welsh Assembly shared his brave vision.

They stuck £17.5 million of public funds into building an industrial estate, called ParcAberporth, right next to his diddy little airport.

This was going to bring companies flocking into Wales; they would all be designing, building and testing out these gleaming hi-tech aerial slaughter machines.

Hundreds of happy and contented Welsh workers would help to build and polish them. The designated military area around Aberporth, known as Danger Area 202, would be extended out across the Welsh countryside.

Soon, the close harmony singing and gentle bleat of our Welsh lambs would be replaced by the triumphant electric squeal of military drones as they hovered above our hills and valleys.

We would once again be a proud nation.

The shrill shriek of the Wankler will remain to Welsh ears as the proud and inspirational sound of a modern nation.

Those hundreds of jobs turned out to be…well, 39. To add to his troubles are the locals who grumble and moan about the noise pollution and the murky ethics of Ray’s trade.

But the biggest concern is that other nations are now developing these marvellous killing machines – including bad countries. And through their goggles of ignorance and hate, they may not see our former pole vault champion as a good minded visionary – but as a legitimate target.

If they play by our rules, the drones will tag Ray and anyone he works with. In fact, anyone living in the area who is of military age will be classed as a ‘militant’ and therefore a legitimate target – that’s if they stick to the same rules of engagement as our military buddies from America.

And then, from an industrial estate somewhere on the other side of the world, they would send a drone to blow Ray to bits. And when they held Ray’s funeral, the drones would also blow the mourners to bits – this ‘double tap’ tactic of targeting the funerals of drone strike victims has proved effective for the US in Pakistan.

But until that day – the glorious shrill scream of the Wankler will remain the industrial song of this proud, proud nation.

You and Whose Army?