There are some bits of Welsh history that are best left alone – that shouldn’t be scratched.

Because knowing what happened to your parents’ grandparents is only liable to make you feel angry; to leave you with a gnawing sense of a past injustice.

So in the interests of keeping calm and carrying on, it’s good that nobody has ever made much fuss about what happened in the town of Mold in the summer of 1869. In another universe, this would have burnt itself into the nation’s collective memory – as relevant to Wales as Bloody Sunday is to the Irish.

It would be a reminder of how Welsh working class communities were fighting to protect their culture, status and rights during the C19th and found themselves being treated with the same brutality as any other troublesome colony of the British Empire. It could help us to understand why Wales has developed into such a damaged and fragmented country.

It started at the Leeswood Green Colliery; a small coal mine about four miles from the north east Wales town of Mold. It was a colliery which, like many at the time, had a history of simmering tensions between the miners and the owners.

The owners had replaced a popular Welsh colliery manager with a man from Durham called John Young. He seemed to have been chosen for his blustering and aggressive management style – somebody who could teach any troublesome Welsh workers who was boss.

He brought with him a team of miners from north east England, who were given the best coal seams to work – meaning they could earn significantly more than their Welsh counterparts.

This was a Chester based regiment with a reputation as the attack dogs of the British Empire.

Young quickly developed a reputation for his obnoxious and arrogant attitude. He continually ignored the miners’ calls to address the pit’s terrible safety record – five years earlier, in 1864, eight people had died in a flooding accident, including a 10-year-old child.

And then there was Young’s hostility towards Wales and the Welsh; particularly for their native language. Despite 80 percent of the Leeswood miners being Welsh speakers, many of them with little or no English, he imposed a ban on the use of Welsh underground.

He argued that it was purely a safety precaution, that a rescuer might not understand a Welsh language scream for help, but it seemed another deliberate attempt to bully and intimidate the local workers into obedience. So with all this bubbling under, what happened on May 1st was no great surprise.

This was the day that Young pinned up a notice informing employees that their pay was about to be slashed. For the Leeswood miners – enough was enough. With no unions to represent them or negotiate on their behalf – they just walked out.

They stayed away until the day the wage cut was due to kick in, when a group of 200 returned to meet with Young in the colliery yard. When he dismissed their protests, they decided to send him packing – literally.

Young claimed the men attacked him, kicking and punching him to the ground, although he could later show no signs of physical injury – unusual if attacked by a mob of men wearing steel toecap boots.

The workers’ version of events was that they pushed him into a coal cart and placed a one-way train ticket to England in his coat pocket. What’s agreed is that after an altercation, Young was led out of the colliery and escorted towards the nearest railway station in the village of Hope.

At the same time, another group of the miners was entering Young’s home, packing up his possessions and carrying them to the station platform. It was only by chance that a couple of police officers stumbled across the miners’ escorting Young – they pulled him from the crowd and led him back to the safety of Mold. 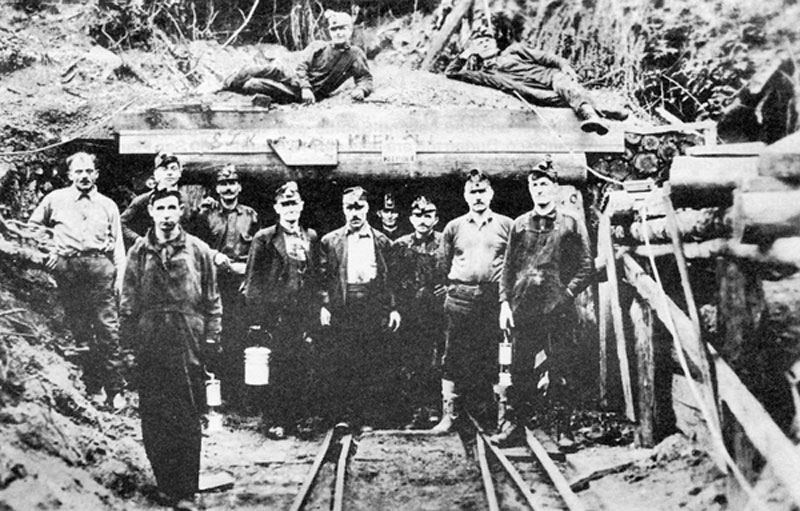 He decided to press charges – claiming he’d been assaulted by his employees and on June 6, seven miners found themselves before Mold Magistrates’ Court. These individuals seemed to have been chosen more for their militant reputations than their actual involvement in the events.

With guilty verdicts seeming inevitable, the police were expecting an angry reaction from locals. So they took the precaution of calling in military back-up from across the border; 50 soldiers from the 4th Regiment of the King’s Own arrived in Mold to help deal with any hostile reactions to the court’s decision.

It was a Chester based infantry regiment with a reputation as the attack dogs of the British Empire. Ten years earlier, they had been fighting ‘rebels’ during the 1857 Indian Mutiny and in ten years time they would be helping to slaughter the native Zulu population of South Africa. But today it was the turn of the Welsh crowd gathered outside the town’s court.

The trial itself was something of a farce with the magistrates having various financial interests linking them to the local mining industry. Only two of the miners had any legal representation and the court proceedings would all take place in English.

Despite there being no signs of any assault on Young – no injuries, no eyewitnesses and no evidence – the miners were all found to be guilty.

The two men deemed to be the ringleaders, Ishmael Jones and John Jones, were sentenced to a month’s hard labour while the rest were handed various fines. The sentences were relatively light, but it failed to dampen the fury of the crowd outside.

An escort led by the King’s Own soldiers started to take the convicts towards the railway station, where they would be transported to Flint Prison. As they pushed through the crowd, angry locals started to use stones from a newly laid road to pelt the soldiers, forcing them to take cover in a telegraph office.

With the crowd continuing to hurl stones at the building, one of the soldier’s fired a shot out through a front window – a protester fell to the ground. For the next 10 minutes the soldiers continued to fire. At first, they shot above heads but then started to fire volleys directly into the crowd – killing four people:

Alongside the four dead, were dozens left wounded, many with serious injuries. One man had a finger blown off as he tried to protect himself. Others would need surgery to remove lead shot from their bodies.

But the King’s Own had also suffered. Captain William Blake, the man who had allowed his troops to fire into the crowd, reported having a cut above his eyebrow. A detailed log was made of the various bits of damage caused to the soldiers’ distinctive red uniforms.

While they counted up the cost of clothing repairs, there were no questions asked as to why this had happened. Why there was such a brutal and sustained attack on civilians armed only with stones. Why this was dealt with by the military and not the police – extra officers had been brought in that day from the surrounding areas.

None of these questions would be asked or answered at the inquest into the four dead. It was conducted by a partially deaf magistrate who strained to hear through an ear trumpet. No miners were called to give their version of events, no family members – just a police representative, a reporter from the Chester Chronicle and two doctors.

The inquest was told that the soldiers had fired on the protesters illegally as the Riot Act had not been read out by an authorised official. But the jury, under the directions of the judge, took just 15 minutes to decide on their verdict:

The deceased met with their deaths through justifiable homicide, caused by the crowd making a reckless and outrageous attack upon Her Majesty’s soldiers with unlawful missiles.

But there was some compassion shown for those who had suffered. They continued:

The jury beg to express their sympathy with the military and the police under Captain Blake and Mr P. Browne respectively, who forebore for so long a time from doing what they eventually did.

The three Welsh victims were named in the judgement but no mention was ever made of Margaret Younghusband; no explanation or apology. As an orphan who had recently moved into the area, she was buried with minimal fuss.

But that wasn’t the end of the matter. A further court case was held with five men accused of taking part in the riot outside the court; each was found guilty and sentenced to 10 years penal labour – including Isaac Jones, whose wife had been shot in the back. It was a brutal and relentless show of power.

What’s striking is the way the King’s Own soldiers, despite being based just 11 miles down the road, had treated the Welsh crowd no differently to any other troublesome natives they would have faced in various parts of the British Empire. 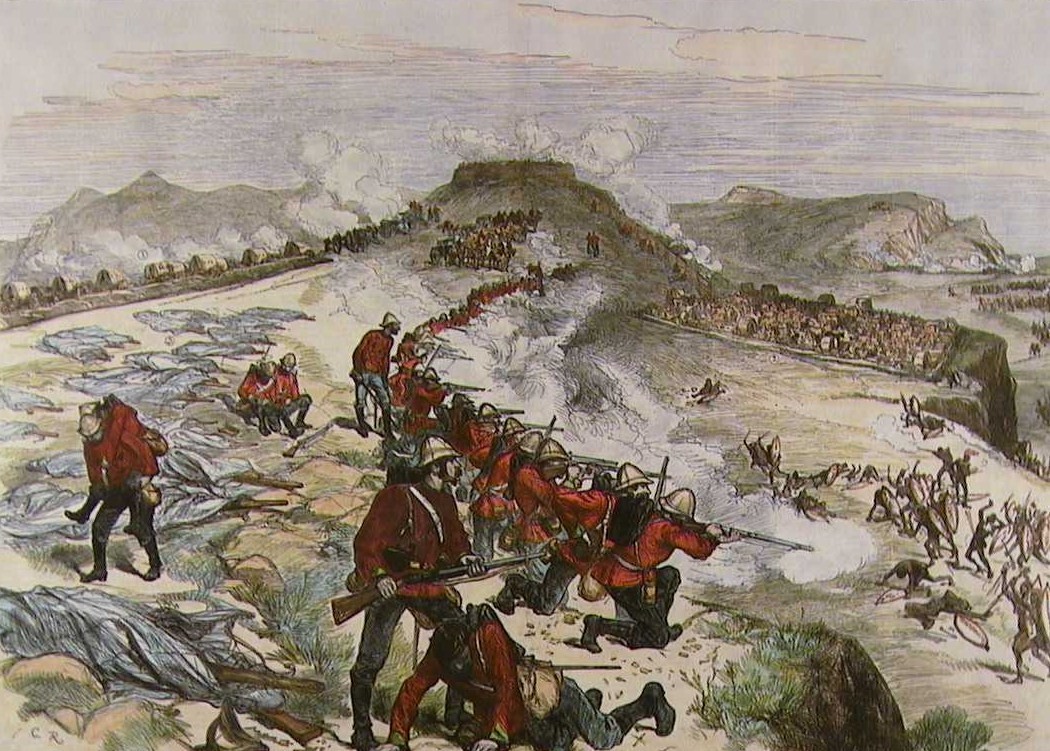 10 years after the Mold Riots, the King’s Own at the Battle of Khumbala.

And it shows how moulded and manufactured our memories of the past are liable to become. Because that scene in Mold, with those brave soldiers, in their bright red tunics, heroically fighting off hordes of savages in the name of the British Empire seems strangely familiar. It’s the kind of scene depicted in the film Zulu; where the Welsh soldiers are shown fighting off the natives – only it didn’t happen.

Only a small number of the soldiers at Rourke’s Drift were actually Welsh. A more historically accurate movie would involve Michael Caine and Stanley Baxter holed up in a small North Walian town and firing volley after volley into a crowd of Welsh miners and their families.