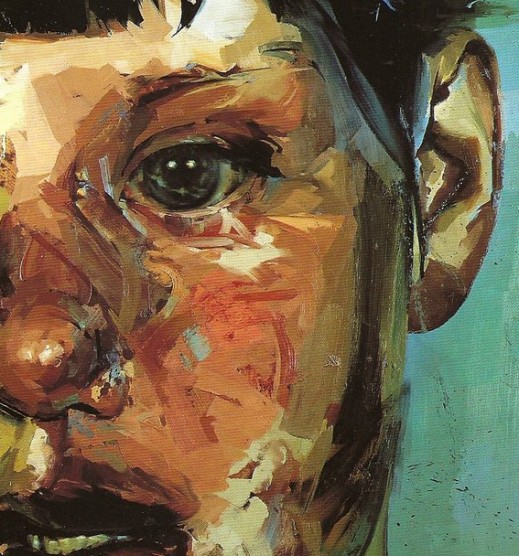 It’s hard to give a toss about language when you’re an English speaker. Because losing your language is not something you’ll ever have to worry about, thanks to the glory days of the British Empire.

English is a dominant language – the third most common in the world. It’s a source of national pride – a gift to the planet. It helped to civilise the fuzzy wuzzies and spread culture and joy throughout distant lands.

So when you hear people bleat on about their language disappearing – it doesn’t really register. There are more important things to worry about in life than some bloke in Aberystwyth demanding bilingual signage on a fish and chip shop.

But what if things were different – if the cultural boot was on the other foot? If the English language found itself under attack. Let’s say those loony UKIP types were right – Brussels really did want to absorb Britain into some creepy all-powerful Euro state.

And that’s exactly what they did.

Germany emerged as the dominant player and German became the common language. It started being used in the legal, government and business worlds, so more English began to learn German as a way to improve their job prospects.

German corporations controlled the media and began to bludgeon the public with anti-English messages. The English language was causing many of the country’s problems – it was dusty and outdated. It helped to explain why the English were such a backwards, thick and bigoted people. The language was holding the nation back – blocking its progress.

Middle-class parents wanted the best for their children, and that meant giving them the gift of German. The BBC began to broadcast more of its output in German. And society started to split and divide along language lines.

Your prospects in life became determined by the language you spoke. German became something for the educated and the powerful. English for the manual classes and the poor – for the people who clean your office toilets.

And within a couple of generations, it was all over for English. It’s now a cultural curiosity – spoken only by weirdos at clog dancing festivals in Northumberland.

As a German speaker you’re sick of hearing these people drone on about their language. You’re sick of them chuntering on about Dickens and Keats and Dad’s Army and The Beatles and all the rest of the cultural twaddle that you don’t understand.

Now, this all sounds absolutely nuts; like the deranged ramblings of some purple nosed Daily Mail columnist. But this is what has happened to Wales and the Welsh language over the past 150 years. It was done by a British/English establishment and it continues to tear the country apart, affecting every aspect of Welsh life.

Because back in the 1840s, around 80 percent of people living in Wales were Welsh speakers, many of them spoke no English at all. Fast forward to the recent 2011 census and that number has dropped to below 20 percent.

But this hides the true scale of the decline. Welsh used to be the language of the everyday world, people would spend their entire lives never speaking English. Now, it’s rare to hear Welsh being spoken on the streets, apart from in a dwindling number of communities in north west Wales.

You probably don’t care much about this if you’re an English speaker – it doesn’t affect you. And that includes the majority of Welsh people who were brought up speaking English; who have been taught at English language schools, watched English telly, listened to English music and read English books.

And I’m one of them. Language was a choice made for me by the school I went to. I was taught to read and write in English with Welsh only taught at secondary school. It was treated in the same way as any other foreign language – like French or German. It gave you tourist Welsh – enough to ask directions to the nearest zoo in Colwyn Bay, and not much else.

The Welsh language has declined so rapidly because the English placed a pillow over its face and smothered it.

So why did Welsh schools stop teaching children to speak the language?

The popular narrative is that it’s just a natural process – a stronger and healthier language replaces an older and weaker one. That the Welsh language is dying of natural causes – like an elderly relative withering away. It’s sad but inevitable. What can you do?

The Welsh language has declined so rapidly because England placed a pillow over its face and smothered it. It has taken around 150 years to complete, there have been occasional bouts of kicking and thrashing against, but it’s pretty much job done.

And it was only when the body went limp that a London establishment placed some chocolate biscuits on the bedside cabinet – bilingual road signs, a Welsh TV channel. And then started to berate the lifeless patient for its apparent lack of appetite.

The English government’s policy towards Wales is not the only reason for the decline, but it’s the main one. It’s the consequence of the state treating the Welsh language as a sickness which needed to be cured.

It’s the way that the British Empire used language to control their various colonies during the C19th. It was a benign method of dominating occupied nations with minimal bloodshed or confrontation – a very English form of tyranny.

Whether it was Ireland, Singapore, Nigeria or North Borneo – the method was the same. English would become the official language used for government, commerce and law. Natives chosen for positions of power would be sent off to English public schools to learn the language and the ‘British’ way of life.

It would seep down through society, exploiting people’s natural desire to better themselves, to have the best opportunities in life. In doing so, it created a vicious form of divide and rule – collaborators versus separatists, English speakers versus native speakers. It was a seed which, once planted, took on a malevolent life of its own – spreading and mutating over generations. 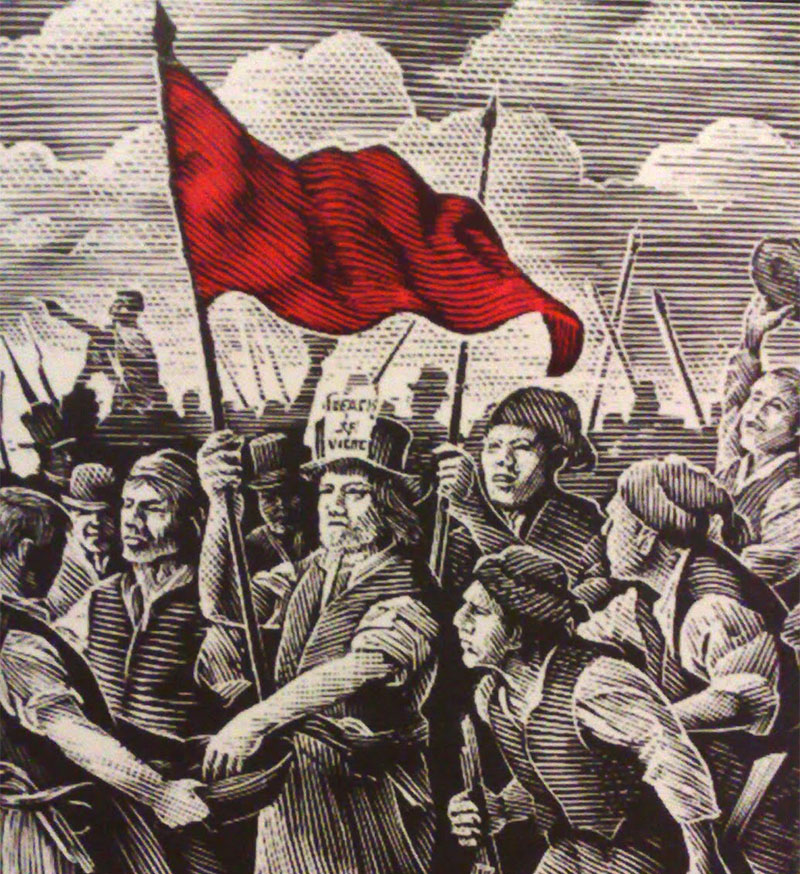 This is exactly what happened in Wales. The country in the C19th was viewed in England as being a dangerous and lawless land – Wild Wales. It was a fear fuelled by the growth of Welsh working class radicalism; the rise of the Chartist movement, outbreaks of rebellion such as the Merthyr Rising of 1831 and the Rebecca Riots during the 1840s.

These were Welsh people joining together to fight against corruption, inequality and injustice. But they were portrayed in the London media as a kind of sub-human rabble; wild and barbaric people who babbled and plotted in their primitive language. It was a view endorsed by the Government; an 1847 report into the state of Welsh education and morality found the country’s population to be dirty, lazy, drunken and over-sexed.

The report concluded that the main problem with Wales was its language. And the cure was simple – the eradication of Welsh from the education system. It proposed that state funded English language schools should be set-up – and that’s what happened. It’s one of these schools where I, like most Welsh people, was taught.

So a deranged report by three English inspectors who couldn’t speak Welsh and who didn’t have any background in education became the blueprint for Welsh schooling; the reason generations of Welsh people have been taught only English.

But the reports other toxic legacy was to give many Welsh speakers a deep-rooted sense of inferiority and shame about their language. It was no longer something to be proud of, it was a problem that needed to be tackled. It was a sickness infecting the country, something the English had found the cure for.

The power of this feeling can be seen during the late C19th with the practice of ‘Welsh Not’. The ‘WN’ initials were carved onto a wooden plaque which school kids were made to wear around their neck if heard speaking Welsh in the classroom. The pupil wearing the plaque at the end of the day would be beaten. It was a practice endorsed by Welsh parents who wanted the best for their children.

This division of the population by language has been eating away at the country ever since. It has created two versions of Wales, two distinct cultures which view the other as a threat. What one side gains, the other side loses. What’s good for one, is bad for the other.

It has left non-Welsh speakers feeling like outsiders in their own country, forever left out in the cold and staring back in at a history and culture they can’t access; at jobs they’re not qualified to do. For Welsh speakers, they have been battered from all sides, endlessly under attack, having to justify the use of their own language – mostly to fellow Welsh people.

Just a blank stare, a rugby top and a grim Welsh cheeriness; a nihilistic acceptance of fate.

It’s a cultural civil war which has brought out the worst aspects of both sides. A nation which once fought for its rights, which fought against inequality and injustice has been effectively turned in on itself.

If the attack on the Welsh language was done to subdue and weaken the country, to create a servile and utterly compliant people who would accept their British medicine – then it can only be seen as a monumental success.

Wales has become a husk of a nation. The decline of the language, the stripping away of links to its history and culture, has induced a kind of dementia. It’s a country which no longer remembers who or what it is – so it simply exists. And accepts the guiding hand of its neighbour.

The removal of the Welsh personality has created a void which is being gleefully filled by the English media’s tub thumping brand of Britishness – the royal family, the Armed Forces, Team GB and all that. And there seems little hope of anything changing.

There’s no fight or energy left. No upsurge of anger. No dissent. No political will. No obvious solution. Just a blank stare, a rugby top and a grim Welsh cheeriness; a nihilistic acceptance of fate. While Scotland gains confidence and considers independence, Wales is left retreating into the arms of its abusive partner and going gently into that good night.